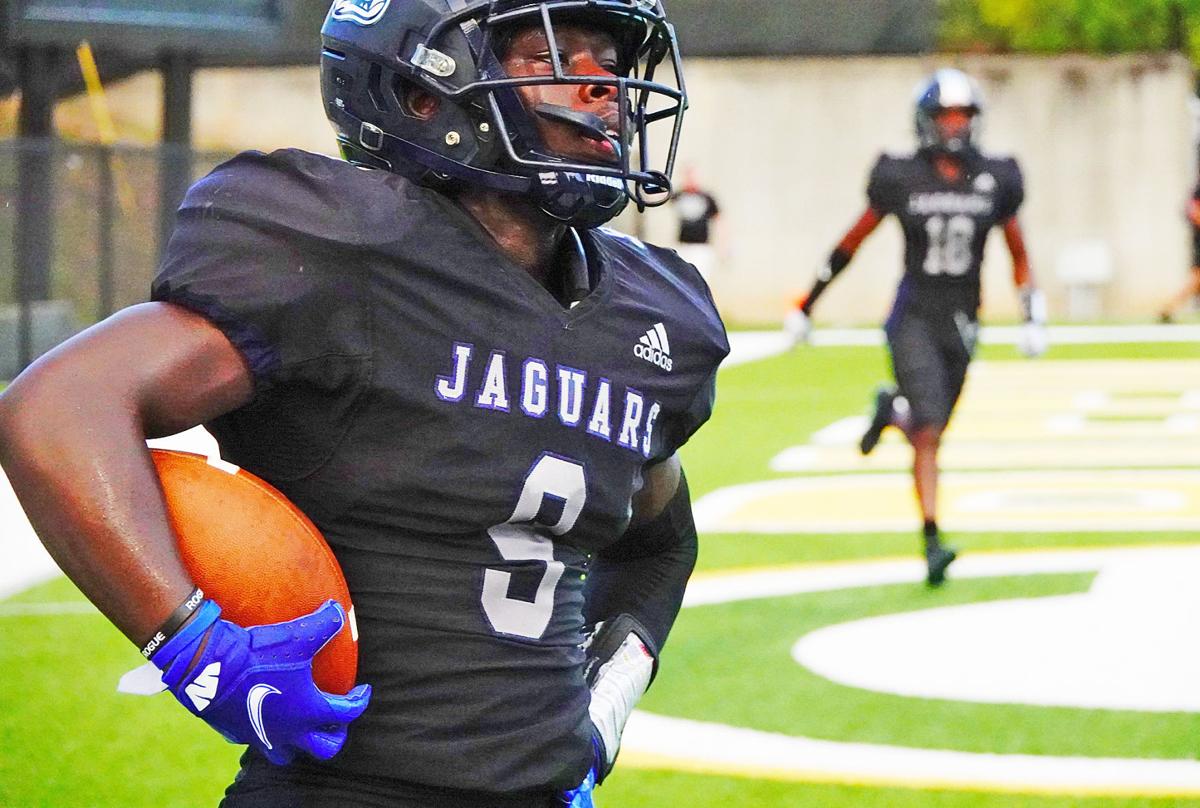 Spalding High’s Jaque’ Miller (9) strikes a Superman pose after scoring on a 16-yard touchdown pass from Joe Braswell during the season opener against crosstown rival Griffin in the season opener on Aug. 20 at Memorial Stadium in Griffin. In the background is teammate Tamajah Berry (18). 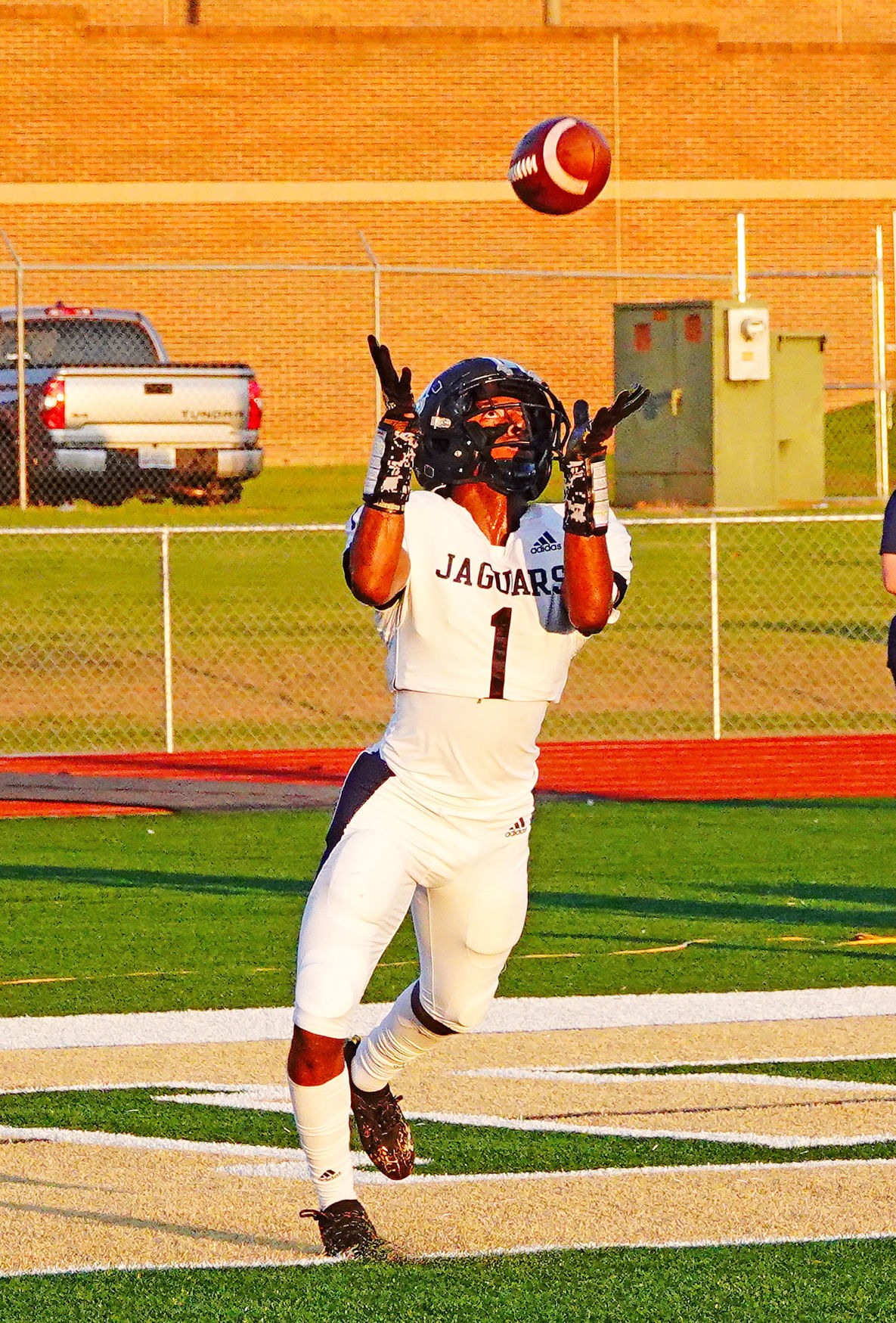 Spalding High kickoff return man Senquavious Alsobrooks (1) looks in a kick during a game at Ola on Sept. 3 in McDonough. The kick was ruled a touchback.

Spalding High’s Jaque’ Miller (9) strikes a Superman pose after scoring on a 16-yard touchdown pass from Joe Braswell during the season opener against crosstown rival Griffin in the season opener on Aug. 20 at Memorial Stadium in Griffin. In the background is teammate Tamajah Berry (18).

Spalding High kickoff return man Senquavious Alsobrooks (1) looks in a kick during a game at Ola on Sept. 3 in McDonough. The kick was ruled a touchback.

For a team that hasn’t played since its 31-26 upset win at then Class AAAA No. 4-state ranked and Region 4-AAAA defending champ Perry two weeks ago, Spalding has been busy.

On the heels of its historic win — by far the biggest in the head coach Carl Kearney era — the Jags (5-1 overall, 2-0 Region 4-AAAA) climbed into the state rankings, cracking the state Class AAAA composite poll at No. 10 last week after being ranked No. 8 in the Georgia Public Broadcasting poll, Maxwell Ratings and 680-The Fan poll as well as No. 9 in the Atlanta Journal-Constitution poll.

It’s the first time Spalding has been ranked since early in the 2016 season.

“It’s an honor ..., a great feeling,” the second-year Jags head coach said of being recognized in the state rankings. “We feel extremely blessed ... .”

“We have a great coaching staff that has worked hard to get us to this point,” added Kearney, “and the kids have bought in.”

Furthermore, the accolades kept pouring in when the Jags were honored by Fox-5 Sports for being its Team of the Week.

While all of that was going on, the Jags also had a region game on Thursday, Oct. 7 at Memorial Stadium in Griffin canceled when the visiting Rutland Hurricanes had a COVID-19 outbreak.

The Jags, which have a bye naturally built into the schedule this week, will now go 21 days between games before it tees it up again on Oct. 22 against first-place and 2020 region runner-up Baldwin (4-2, 3-0) at Memorial Stadium in Griffin.

Despite all of that, the good news seemed to follow Spalding during its off week as the Jags moved up to No. 6 in this week’s state composite poll (No. 6 in the AJC and GPB polls, No. 7 in 680-The Fan’s poll and No. 10 in the Score Atlanta poll) after a few teams ahead of them lost last week.

Kearney is just glad to see all of his team’s hard work starting to pay dividends.

“It goes back to ... bringing in a new system and trying to get the kids to buy in,” said Kearney. “It was hard, it was tough.”

Spalding, which was playing with a first-time head coach and first-time coordinators on each side of the ball, went 1-9 last season — though it should be noted that spring, summer and preseason practices alike were either canceled or severely curtailed not to mention spring and preseason scrimmages were nixed because of the COVID-19 pandemic.

Greg Hansen: Wildcats spit the bit in most excruciating loss yet

“I was coming in and preaching what I was preaching and we had a few close games,” Kearney recalled, “unfortunately we only had one victory so it was tough to see the light at the end of the tunnel.”

Fast forward to this season.

With full spring, summer and preseason practices not to mention spring and preseason scrimmages, a whole new world emerged for the Jags.

“We had the entire offseason for the kids to start to see results, what the weight room program did for them and they started to believe in themselves,” said Kearney. “And once they started believing in themselves, then of course, they were able to come out and play a lot harder.”

It showed on the field too when the Jags took leads of 7-0 and 14-6 against crosstown rival Griffin High in a game they eventually lost 32-14 during the season opener on Aug. 20.

Since then, however, the Jags have reeled off consecutive wins at Union Grove 35-28, at Ola 27-17, home against Pike County 49-28, home against West Laurens 21-7 and at Perry by the aforementioned 5-point victory.

“It’s a real unique situation,” Kearney said about the Jags being 5-0 in their last five games. “You want to praise them and make sure they’re excited about the change and the progress we have made, but ultimately it is my job to make sure they understand to have a short period of time to celebrate but it’s business as usual after that weekend celebration.”

“We have to come back on that Sunday morning and it’s business as usual,” he added of preparing for their next game against Baldwin. “You know the kids have bought into it.”

Toward that end, just because it’s a bye week and school is out for fall break doesn’t mean the team didn’t stay sharp this week.

They have practiced Tuesday and Wednesday and are scheduled to practice again today. Kearney said if he doesn’t like what he sees, the Jags will also practice on Friday.

“We’re not content with where we are,” Kearney said. “We’re enjoying the process, but ultimately the goal is to win a region championship and to see how far we can go in the playoffs.”