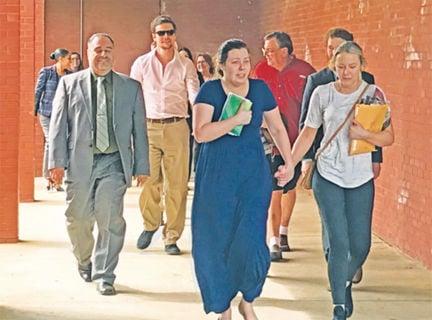 Mary Katherine Higdon, in the blue dress, is pictured leaving the Spalding County Jail on June 26, 2019 surrounded by her defense team and family. 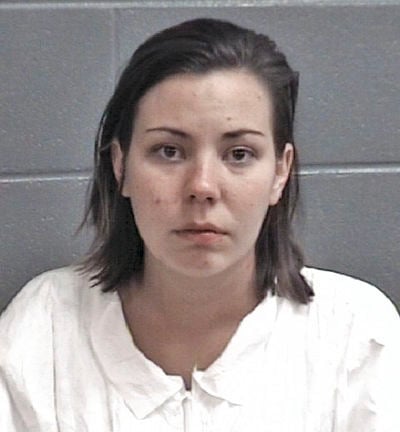 On Aug. 1, 2018, Mary Katherine Higdon called 911 to report she had shot her boyfriend, Steven Freeman.

It was all an accident, she told first responders. She said she was handing the gun to Freeman when it went off and that she didn’t know the weapon was chambered. When she talked with investigators at the police station, they say she confessed to murder. But there was a major problem — the audio on the tape where she allegedly confessed was impossible to hear due to a feedback hum.

Correspondent David Begnaud and “48 Hours Suspicion” report on what happened that night and the police investigation in “The Case Against Mary Katherine Higdon,” to be broadcast Wednesday at 10 p.m. on CBS.

“All I know is what’s in my heart,” Higdon tells Begnaud. “And I know what happened that night — I loved Steven. And I would never ever do anything to hurt him.”

It’s a case that rocked Griffin.

Higdon and Freeman were high school sweethearts and were living together the night Freeman died. The investigation into what happened revealed a toxic relationship with allegations of abuse that left two families shattered. It’s also a case that raised many questions about what went wrong and who was at fault for the violence that erupted that summer night in 2018.

“The gun going off — I don’t even see how, like, it even got him,” Higdon tells Begnaud. “Because I wasn’t even, like, really pointing it directly at him in the first place.”

Investigators believed it was no accident. Prosecutor Kate Lenhard maintains the couple’s relationship was unraveling and Higdon shot Freeman out of anger. Prosecutors believed crime scene evidence and Higdon’s conflicting statements all led to a clear case of murder.

At her trial in June of 2019, Higdon testified that although she didn’t know the gun had a bullet in the chamber, she had held the gun up that night because she was scared of Freeman. To the surprise of many in the courtroom, Higdon painted a picture of escalating abuse at the hands of Freeman. She read the jury multiple ugly, threatening text messages that Freeman sent to her a year prior to his death. She also testified that Freeman hit her and on two occasions raped her.

The prosecution was not buying it. In her cross-examination, Lenhard confronted Higdon about never having complained about Steven’s alleged abuse.

On July 26, 2019, Higdon was found not guilty on all charges — including felony murder, malice murder, aggravated assault, and possession of a firearm during the commission of a felony. Gasps and sobs were heard throughout the full courtroom after the jury foreman read the not guilty verdicts for each of the four charges.

After the verdict, Higdon could be seen tearfully hugging her defense attorneys Michael Granims and Jorge Carabajal.

Then-Chief Assistant District Attorney Marie Broder was seen talking quietly with the Freeman family, who were crying and hugging each other after the verdict.

“My heart goes out to the family and friends of Steven Freeman,” then-Spalding County District Attorney Ben Coker said after the verdict was reached. “While I am disappointed by the outcome, as an officer of the court I must respect the verdict.”

“I am astonished that the jury has made this decision,” Griffin Police Chief Mike Yates said about the verdict.

Surrounded by her family and defense team, Higdon left the Spalding County Jail at about 5 p.m. on Wednesday, June 26, 2019.

“God did this,” she was heard saying as she walked to her car. “This is all God.”

Editor’s note: This story contains reporting from Karen Gunnels, who covered the trial.