The Walking Dead franchise really has a thing for aging its protagonists up in happy dream sequences, doesn’t it? We saw “Old Man Rick” (Andrew Lincoln) during Dead‘s Season 7 — and now, we have “Old Man Morgan” (Lennie James).

Unlike on the main show, though, this alternate version of Mo-Mo isn’t a vision he’s having: instead, it belongs to his beau Grace (Karen David). Unconscious, injured, and in childbirth, her mind travels to an alternate reality where trees are pink, Morgan has white hair and a beard, and everyone’s happy (that’s how you know it’s not really real). Oh, and she meets her daughter, Athena, there — but not all is as it seems, and the end of the episode provides one of the season’s biggest and most heartbreaking twists (and on Mother’s Day, no less!?). Here’s what happens. Grace “wakes up” in her new world, where she’s promptly saved from some walkers by Athena (guest star Sahana Sprinivasan). Not knowing that Grace is her mom, Athena brings her back to Morgan’s community, which is thriving. June (Jenna Elfman) is the community doctor, and Charlie (Alexa Nisenson) is her apprentice; Dwight (Austin Amelio) and Sherry (Christine Evangelista) have a family; Strand (Colman Domingo) and Daniel (Ruben Blades) have set aside their differences; Alicia (Alycia Debnam-Carey) has moved back to the Dell Diamond with Wes (Colby Hollman) and Luciana (Danay Garcia) to start her own group. Sixteen years have passed and all is well.

Morgan is initially suspicious of Grace’s insistence that she’s…well, who she is, but she manages to convince him of her identity by throwing out a few memories only the two of them would have — like their sweet carousel ride in Season 5. But there’s a good reason Morgan doesn’t recognize his love: In this reality, she died in childbirth. Her daughter, Athena, survived, and the groups set aside their differences to raise her. In a way, Grace’s death, and her child, created the peace that they now have.

Grace doesn’t want to tell Athena she’s her mom, but Morgan suggests they can all go out on a run so mom and daughter can spend some quality time together. And that’s where things go bad. They come across a car with “The End is the Beginning” painted on it, which explodes — in the aftermath, Morgan has vanished. Grace starts piecing together what happened to her in the real world as she remembers that car exploding and going unconscious, and she starts being able to hear the real Morgan begging her to come back to him. Blades also teases what Daniel plans to do once he's in Lawton.

Time and events in Grace’s world start running parallel to reality. She can hear Morgan when she puts on her headphones because in the real world, he’s talking to her through them. Walkers appear, mimicking the walkers that surround the vet’s office where Morgan took Grace to escape Riley (Nick Stahl) and his minions. Grace eventually figures out that she needs to go to the vet’s office in her reality to get back to the real Morgan.

Real-Morgan does battle against Riley, who wants the key he has around his neck. This key will allow The End is the Beginning to launch nuclear warheads, thus wiping out everyone who doesn’t “see how they see.” Morgan’s not inclined to hand it over, so they fight — he kills all of the baddies except Riley, who he wounds by stabbing his stick through his shoulder. Riley runs off, and that seems to be that.

In the dreamscape, Grace and Athena head to the vet. They run into trouble on the road when Riley attacks them, and Grace has a contraction, which causes Athena pain, too. They fight through it, and Grace can’t hide the truth anymore: She tells Athena she’s her mom. They head to their destination on horseback (perks of being in a dream: randomly convenient transportation!). They make it there, but Riley and his minions are there, too, as walkers. They don’t stay down, and all hope seems to be lost — and then dream-Morgan shows up to save the day! In the aftermath, the trio has a heart-to-heart, with Grace explaining that she believes she’ll likely die in childbirth and this dream comprises her final moments, but she’s grateful she was able to spend time with her daughter. “I’ll always be with you,” she says and gives Athena a hug. “You can let go, my angel.” Then she goes through the barn door, seemingly accepting of her fate. This gets her back to the real world, where Morgan is ecstatic to have her back. She tells him she doesn’t think she’ll make it, which of course he doesn’t want to hear, but she tells him it’s all right as long as Athena survives. She records her voice for her daughter on her tape player, and then — the unexpected happens.

Riley has found a truck, and he crashes it into the barn. Still wounded, he jumps out and points a gun at Grace, demanding Morgan turn over the key or he’ll pull the trigger. Left with no choice, Morgan hands over the key. This marks the first major departure from Grace’s dream world: In that reality, Athena wore the key around her neck.

The second departure is much larger and much more heartbreaking. Grace gives birth, but when Athena enters the world and Morgan catches her, she’s not crying. Grace’s baby is stillborn. She cries as she holds her child, realizing her perfect vision wasn’t representing her final moments: it represented her daughter’s. “It was only a dream,” Grace sobs. 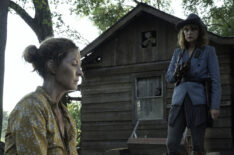 Another major player was offed this week — here's what we know about what's next.

This article originally ran on tvinsider.com.